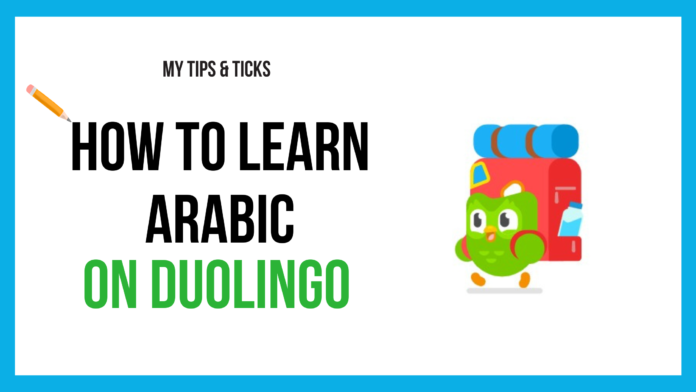 Today on the blog, I’m sharing my review on learning Arabic on Duolingo, as well as some Duolingo tips and hacks for learning Arabic I’ve learned along the way. Duolingo doesn’t really have an ~INTRO~ when you boot up a new course, so I’ve also written my review as a sort of guide that I wish I had had when I decided to learn Arabic.

I had literally ZERO experience with Arabic before starting the Arabic course, so I’m sharing this info as an absolute beginner to the language.

Is Duolingo a good way to learn Arabic?

Because you may be hunting for specific information in my review of Arabic on Duolingo, I’ve shared an outline below! Feel free to use the CMND+F or CTRL+F keys to “search” for a specific section, to get to the information you want more quickly!

It took me a minute to figure out what “Modern Standard Arabic” is, and how that relates to learning Arabic on Duolingo!

Aside: Hey friend! In this blog post, I talk about the Arabic language and what I’m doing to learn it. I am definitely not an expert in any of this, so if I say or share something that is actually pretty offensive (or just.. off or wrong!) please feel free to drop me a line via my contact page! I am doing my best to learn and be informed, aaaaand I recognize that I can mess up!

Tip #1 for Learning Arabic on Duolingo: What dialect of Arabic does Duolingo teach?

It’s kind of like learning Spanish. The Spanish you’re going to speak in Argentina (love Argentina!) and Spain is going to be quite different. When I visited Spain a few years ago with my bestie who is from Argentina, she could kind of understand Castilian Spanish (spoken in Spain), but it was NOT like what she spoke at home.

From my research, Arabic seems to be like that, only moreso! The dialects are different, enough so to the point where people from different regions or countries have a hard or even impossible time understanding one another.

Put another way, Modern Standard Arabic was instituted so that the roughly 420 million people in different countries can communicate with each other. But, because the education access can differ a LOT amongst these communities, some people are more versed in MSA than others.

Soo, if you’re learning Arabic on Duolingo, you’ll also need to learn the specific dialect for a specific country or region.

TLDR, learning Modern Standard Arabic is a good base and a solid foundation, but if you’re learning Arabic to speak with a specific group of people or person (for example, your partner, their family, etc) then you’re ALSO going to have to learn the dialect they speak. For instance, I’m learning Arabic to be able to speak to my BFF (who is fluent) and her boyfriend (who I think is pretty rad). My BFF is my chosen family, and so I booted up Arabic.

Tip #2 for Learning Arabic on Duolingo: Does Duolingo use English letters to teach Modern Standard Arabic

In another blog post I wrote about using Duolingo, I talked about how hard it was to try to learn Mandarin Chinese on the platform. It felt like I went from 0 to 60, and I had a hard time remembering the Chinese characters.

Soooo I was (understandably) a little nervous about trying to learn Arabic on Duolingo.

Because Arabic uses a different alphabet than English, I was confused about (and interested to see) how Duolingo uses Arabic letters and English letters.

“Are they going to dump me in the deep end again?” I wondered.

I personally breathed a sigh of relief when I saw that Duolingo has you learn the sounds of letters using English letters, and then vocabulary words in Arabic. Some folks make fun of Duolingo for teaching “nonsense” words, but I prefer it! I felt like I was being onboarded instead of dropkicked into the deep end of a swimming pool.

Okay, so I wrote a whole blog post with lots of math on how long it takes to learn a language on Duolingo. In this section, I talk about my own (kind of stunted) progress, as well as sharing some math.

For myself, learning Arabic on Duolingo (as a native English speaker) has been extra challenging, because I (perhaps you!) have to learn the Arabic alphabet. (I’ll talk more about tips and strategies I’m using to learn the alphabet further on down.)

At time of publishing, there are 3 units for Arabic on Duolingo. It took me a couple of months to get through Unit 1, and now I feel like I’m trudging through mud to get through Unit 2. The difficulty really picked up at the end of Unit 1 for me, aaaaand I also know that I learn through repetition, so I’m repeating lessons and doing a lot of reviews.

While I strive to have a growth mindset, I also know that learning languages doesn’t come as naturally to me as other people.

For example, some folks, like my friends Kate and Kaitlin, and what I call “Little Genius Language Learners.” They can whip through a new language on Duolingo in 3-6 months. I know this is probably going to be a bit of a steeper climb for me.

How long does it take to complete Arabic? (math):

Each unit has 5-20 modules, and each of those modules has 6 LEVELS, with an additional level you have to pass to finish the module. Each level has ~12 questions per level.

So, to figure out how long it’s going to take YOU to finish Arabic on Duolingo, you first want to time how long it takes you to finish a new levels In my post here, I took the average of a bunch of timed levels, because I’m an engineer and a freaking nerd, lol.

All in all, there are approx 554 lessons for Arabic, and you can use this blog post to calculate your estimated time!

For myself, I have learned to aim for consistency. I use a goal system I call “Minimum, Actual, Killing IT!” For learning Arabic on Duolingo, this looks like:

Having a tiered goal system like this helps keep me from getting discouraged when life is busy, and also helps me be competitive when I’m trying to get to Diamond League on Duolingo!

Tip #4 for Learning Arabic on Duolingo: Is Duolingo the best app to learn Arabic?

Before booting up Arabic on Duolingo, I looked into other apps or platforms to learn Arabic in a self-led manner. Right now in my life, other priorities mean that taking a traditional class isn’t a fit. (And, also, from learning other languages, I know most classes go too fast for me, frankly).

I like being able to repeat lessons and do drills on Duolingo, no matter the language I’m learning.

Sooo, is there a better app to learn Arabic on than Duolingo?

Frankly, I don’t know! I haven’t tried other apps that teach Modern Standard Arabic. I figured I’d start with Duolingo and “level up” to 1:1 tutoring or other platforms once I got my feet wet.

I like being able to repeat lessons and do drills on Duolingo, no matter the language I’m learning.

Ok, my final tip for learning Arabic on Duolingo?

Don’t try to go it alone! I have found I am SO MUCH MORE successful on Duolingo when
I have partnered with friends and internet besties to learn a language.

Connect with friends and people you know on the app! Duolingo has a sort of Facebook-like feature, where you can “friend” people who are also learning a language. I love to get a little competitive by seeing how many XP points my friends have earned, and I *also* love to send congratulations messages when someone hits a 100 day streak or finishes a unit (or finishes the whole language)!

I haven’t started using it yet, but something I ordered a few months ago was a little workbook to learn the Arabic letters. I want to learn how to use my hand to write the Arabic script, and while using my finger on the app to trace letters is nice, I want to WRITE. (I know I could get like a stylus to use on my iPhone, but I don’t want to keep track of that.)

I found this fun Arabic workbook used to teach children their letters, and I’m going to use it to learn the alphabet. No, I’m not in elementary school — but learning a language often requires childlike curiosity and a willingness to let go of your ego!

I love sending out about 1 email per week, with tips ranging from plus size fashion to career advice to, you guessed It, new Duolingo tips!  If you have questions you’d like me to address in a blog post, please let me know!  Subscribe HERE! 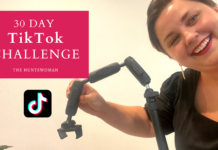 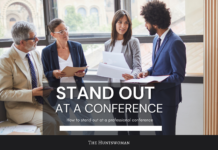 How to Stand Out at a Professional Conference | Business Conference Tips 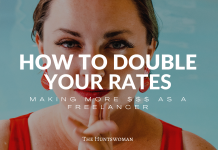 7 Different Looks to Rock on Nov 6 [When You Go Raise Hell at...

Where to Buy Plus Size Steampunk Costumes & Cosplay | 7+ Costumes

7 Brands – Where to Buy Plus Size Swimsuit Coverups | 2022 Guide

ABOUT US
The Huntswoman is an LGBT lifestyle blog dedicated to queer culture and politics, fashion, business and lifestyle. © 2022
FOLLOW US
© Newspaper WordPress Theme by TagDiv | Website Content Copyright 2020 by The Huntswoman LLC
34 shares