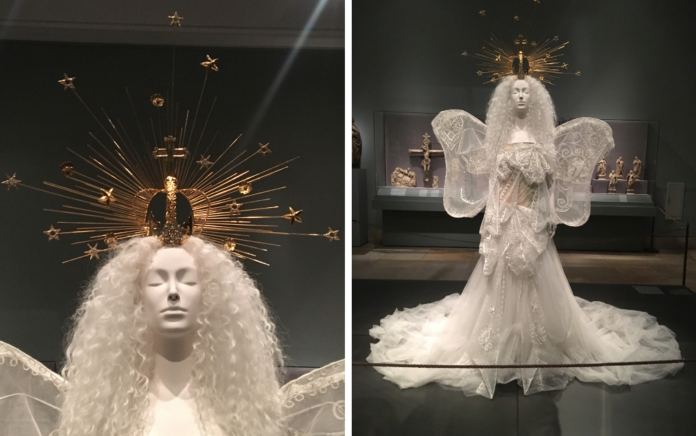 A couple of months ago, I was able to visit The Metropolitan Museum of Art, going specifically to view the exhibit, “Fashion and The Catholic Imagination.”  This blog post is a collection of my favorite factoids and pieces, as well as my reactions.

It is not an academic paper or review.

Picture me and you getting coffee, and discussing the exhibit.  *That* is the tone I’m going for!

Every year, The Met premieres a fashion exhibit at The Met Gala, where celebrities and patrons spend a pretty penny (around $30,000 a ticket, or $250,000 a table – if you can get on the list) to attend, and proceeds go to funding The Anna Wintour Costume Institute.

The entire event is a beautiful manipulation of celebrity and social media, for what could otherwise easily be another boring fundraiser.

Why have a huge benefit for fashion?

The Met has one of the most impressive collections of clothing, from luxury and couture houses around the world.  However, maintaining that collection comes with quite a price tag. The 2017 Met Gala raised $12 million dollars for The Costume Institute.

(In college, I went on tour with a member of the theatre department – and we went through back rooms and a huge storeroom packed with clothing items.  Many of the pieces were packed in boxes, awaiting funds or a curator to come through and put them on display.)

This also speaks to the question, “Is fashion art? Does it belong in a museum?” Academics enjoy debating this topic quite a bit, as museums are left donations of clothing often – but aren’t able to display (or pay to conserve) most of what they receive.

While academics debate the definition of art, it doesn’t really matter what their opinions are.  Fashion exhibits are very popular with the general public, and help museums sell tickets.

Fun Fact:   The exhibitions put on by The Costume Institute that premiere at the Met Gala are some of the most popular exhibits at The Met. So there, academia! 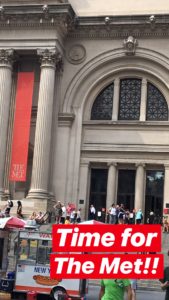 In the past, the exhibits that open at the Met Gala close in early September, but this year the exhibit stayed open until October 1, leading to record breaking attendance.

Below, i’ve shared my thoughts on the exhibit, including pictures I took.

I tried to find a layout/floor plan to share here, but alas, no luck.

I’m a professed “exhibit design nerd,” because I think the way that we display objects is a cultural commentary on TOP of the objects being displayed.  The politics and debate of exhibit design is FASCINATING.

Let’s take this section by section.

There are two corridors, or “Byzantine Galleries” as curator Andrew Bolton calls them, that led into the exhibit.  Walking down the corridors, you were surrounded by Byzantine art.  High above you on pedestals were mannequins.  One corridor showcased ~5 mannequins in Versace (from Gianna Versace’s last collection before his death), pieces glittering like chainmail.  The corridor ends with a bride.

The opposite corridor shows Dolce & Gabana pieces, inspired by mosaics at The Monreale Cathedral in Italy.

While I appreciate the heavenly reference (look up, and see literal angels), the fact that the mannequins were easily 20 feet off of the ground made it difficult to, you know, actually see the fashion.

Luckily, heavily beaded or metallic dresses were chosen, so you at least got to feel a little #BlindedBySplendor as you craned your neck.

Following the corridors were a series of galleries, showcasing pieces from Catholic fashion designers.  Chain mail, sacred hearts and homages to the Madonna, or Virgin Mary, were apparent in this Gaultier masterpiece: 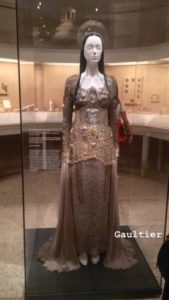 This gown referenced the Sacred Heart through metalwork applied to the bodice, and other pieces also referenced this Catholic symbol.  The Sacred Heart is a motif representing Jesus’ heart speared on the cross.  This image was repeated and reinterpreted throughout this room. 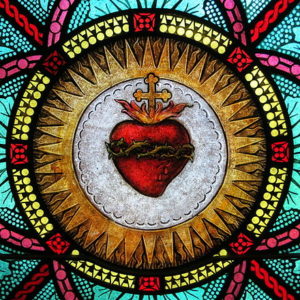 Walking through this section, it was clearly a homage to the Virgin Mary, or The Madonna.  The garments showcased here were used to dress Madonna statues within churches, a practice I hadn’t heard of until this exhibition. 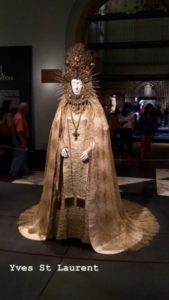 Truthfully, I didn’t quite grasp that the main exhibit/room was modeled after a traditional Catholic Church (apologies to Ms. Shelley, my AP Art History Teacher).  I saw references to a church structure in how some of the dress forms were arranged, but I didn’t realize that it had been intentionally modeled after a church (nave, central aisle, two side aisles).

This photo doesn’t exactly depict how the exhibit was laid out, but it’s quite close:

I definitely caught references to side aisles (where Thom Browne and Rossella Jardini’s work was lined up), but didn’t fully put two and two together until listening to interviews with Andrew Bolton, the curator.

Speaking of Thom Browne and Andrew Bolton – I’ve always wondered how the two (they’re married) discuss The Met exhibits.  I like to imagine Bolton saying over dinner, “Pass the peas, would you darling?  Oh, also, we’re going to need about a dozen pieces from your archives.”

[Okay, truthfully, that probably doesn’t happen – most of the pieces displayed in this exhibit were already donated to The Costume Institute, or on loan from private collections.]

Back to the subject of the exhibit: The exhibit design became quite genius here, as Bolton separated the “earthly” from the “heavenly.”  In the first section I walked through, I saw interpretations of clerical vestments, clothing inspired by the habits of nuns, etc.

As you reached the far end of this gallery (Before passing through a screen, more on that in a minute!) you would turn around to see a “choir” in the galery.

Real talk:  Just like the Versace/Dolce & Gabana angels, it was not easy to view these pieces.  But I get what they’re trying to do, exhibit design-wise, and it did sort of create an “in group” amongst patrons who saw it (many didn’t). 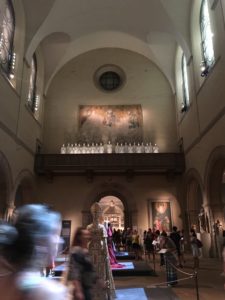 It comes as no surprise to anyone reading this that my favorite piece was this McQueen for Givenchy (GHaute Couture SS 1999).  This piece was actually the jumping off point for my first collection (currently under construction).  The tension between masculine and feminine in fabrics and style lines is IT.

I visited the Savage Beauty exhibit in London four separate times, and many of the pieces weren’t easily examined up-close.  I took full advantage of being close to this, placing my hands behind my back (so as to put the museum security guards at ease – no touching!) and going through and examining every stitch. 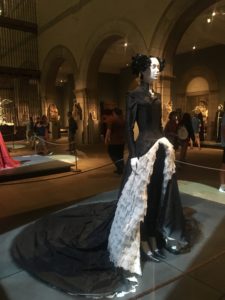 A Note on Fashion Design

It’s this close examination that makes The Costume Institute so valuable to designers.  Being able to walk up to these iconic pieces, and dissect then reconstruct the pieces in my mind’s eye was invaluable.  It was also such an important moment for me as a designer, being able to pinpoint stitches and techniques used to create these clothes. (Also, real talk:  This exhibit underscored the importance of an atelier, the team of seamstresses, tailors and craftspeople that make a designer’s vision come to life.)

Unfortunately, I put this post on hold more than a year ago – because my phone lost the remaining photos!  I now use a backup in “the cloud,” and I definitely recommend the choice to others!

I’ve shared some photos from the “green” portion of my diagram below.  At the center of this part of the exhibit is the famous “Wooden Balsa Wings” from Alexander McQueen’s SS 1999 collection.

There were other takes on “relics” in this area of the museum as well:

Fashion from The Vatican

The exhibit continued in a different part of the museum, with items on display from Vatican City.  Robes, various hats, etc etc, were on display.  Most of these were encased in glass, making it difficult to take pictures.

Overall this exhibit was breathtaking.  Want more info and photographs?  Of course you do!  Andrew Bolton published an entire book on the exhibit, “Heavenly Bodies: Fashion and the Catholic Imagination” which can be purchased on Amazon, here.

If you’d like to keep in touch, be sure to subscribe to my weekly newsletter, so you’ll stay up-to-date on new brands and plus size fashion content! 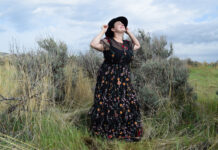 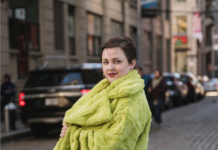 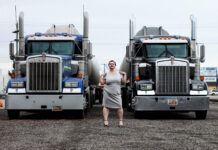 Where to Buy Plus Size Swimsuits (for Big & Small Busts!)

My Fave Plus Size Boutique: Plus BKLYN

ABOUT US
The Huntswoman is an LGBT lifestyle blog dedicated to queer culture and politics, fashion, business and lifestyle. © 2020
FOLLOW US
© Newspaper WordPress Theme by TagDiv | Website Content Copyright 2020 by The Huntswoman LLC
0shares