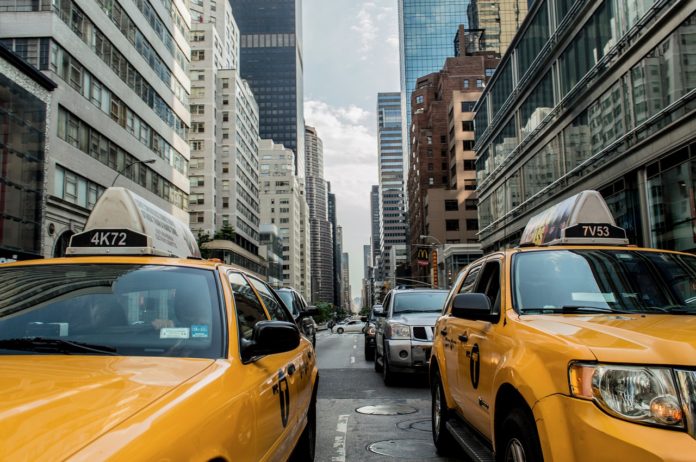 I travel a lot (woo being self-employed), and one of my favorite places to go is New York City.  I’m currently working on my luxury fashion collection (Look #5 is in the works), and I’ll be moving to NYC soon.

Because I go to NYC *so* much, I figured that it was time to share some of my tips for visiting the city.  If there are tips that I miss, comment with yours!  I’ll be sure to add the info and credit you.

When flying to NYC, you have two choices:  LaGuardia or John F. Kennedy Airport.  I’m a big fan of flying Southwest (they let you change your flight with ZERO change fees), so I usually fly into LGA.

LaGuardia is undergoing a LOT of construction (esp the Southwest terminal), so be prepared to feel a little bit like you’re in a FEMA tent when you land. 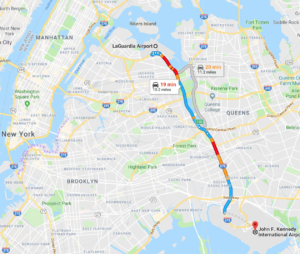 A third option is EWR (Newark Liberty Airport) in New Jersey.  I’ve never flown into this airport, but my friend Nicole Kramer, says she flies into it all of the time!

From my friend, Nicole Kramer:  “It’s super convenient for those on the west side of Manhattan and downtown.  You can even take a New Jersey transit train to Penn Station in the city.  It’s also our United hub!”

That is largely dependent on the things you want to do in NYC!  If you’re about seeing as many Broadway shows as possible, staying in Manhattan (in Midtown, close to Times Square) may make sense.  If you’re more about thrifting and that hipster lifestyle, Brooklyn is IT!

Keep in mind that there’s no one PERFECT place to stay in NYC.  So pick an area that’s close-ish to a majority of what you want to do.

SPEAKING of Broadway, a great way to get cheap tickets to see a show is at the TKTS booth.  The TKTS booth is a red booth in Times Square, where you can same-day tickets for a Broadway show – at a fraction of the price.  I recommend going to TKTS in the morning, seeing Times Square and Midtown (that’s where Mood Fabrics is!) and then going to your show in the evening.

Two weeks from today we celebrate 10 years of the now iconic red steps opening in Duffy Square! Tell us, what was the first show you saw through TKTS? Was it before or after the redesign? #MyFirstTKTS ♥️ • #TimesSquare #Broadway #OffBroadway #Theatre #TKTS #NYC #NewYorkCity

Okay, i have DEFINITELY been guilty of Lyfting everywhere in NYC.  However, the major lines go through major tourist areas.  You’ll actually SAVE a significant amount of time using the subway, instead of waiting in traffic.

However, sometimes the Subway doesn’t go where you want to go! For budget purposes, check the Lyft fares to/from the airport, and between attractions.  Then you can decide what’s worth taking the subway for, and plan your spending accordingly.

If you love fashion forward plus size looks, be sure to visit plus BKLYN.  If you’re traveling with babes who aren’t plus, they can still have a blast checking out the fun accessories.

Peep our fav ladies @thisisjessicatorres and @cleomsf tonight on @thisisfusion ’s #SexRightNow talking about body acceptance, fashion and being a boss babe in a world constantly telling us not to. And… you just might recognize your fav lil shop and some cute styles featured at PBK! ????

There’s NO way to see everything in NYC.  Pick one thing a day you absolutely must do, and then plan activities around that attraction.  If you MUST go to The Met, add in your visit to Central Park.

Also, real talk, visiting the Statue of Liberty basically takes a WHOLE DAY.  If you’re convinced you’ve gotta see it – go for it, but keep in mind it takes a long time to go to and from.

If you’re ready to load up on “I <3 NY” t-shirts, you may find that a lot of vendors don’t put prices on anything.  Don’t accept the first price they give you.  Knock a couple of bucks off.

I wish I was a Travel Goddess. You know, those people who take one carry-on for a 10-day trip, and somehow manage to make infinite outfits and are ready for every occasion. INSTEAD, I’m the bitch that’s carrying 2 *packed* suitcases up my BFF’s walk up, crashing into the wall like a bowling ball in bumper lanes. ???? However! One travel secret that I do have is traveling in @leotanewyork pieces. They use jersey fabrics that don’t require ironing, and are machine washable. Their clothes move and stretch with you, so you’re not left trying to discretely fix fabric around your derrière and failing. ???? I’m a 3L in @leotanewyork pieces. This dress is their Sweetheart dress in Goji Berry ???????????????????????? What’s your favorite travel hack or secret? ???? @femmenightmare #Sponsored #leotanewyork #Leota #qwear #plussizedivas #BrooklynBlogger #fatgirlstraveling #psootd #effyourbeautystandards #nyfwplus

Tip #8:  Use Yelp! to Find Restaurants

It can be tempting to just go into a chain restaurant, because there are SO many places to eat.  Planning your restaurants beforehand is impossible, so pull out Yelp and sort by distance and rating to choose somewhere to eat.

Street food is delicious in NYC, but make sure to check for an “A” rating from the Health Department before handing over cash.

You can save money by staying in an AirBnB with a kitchen.  However, most AirBnB hosts use a door code to get in and out of an apartment.  A door code that may or may not have been changed after another guest.  Avoid new hosts, and make sure to read the reviews (and cancellation policy!) before booking.

Hotel rooms in NYC are small, but with shuttles to the airport and continental breakfasts – they may actually be a better choice!

Growing up in a small town, it was super trendy for people to come back and show off their fake LV or Chanel bag.  Sales of counterfeit luxury goods are used to fund sex trafficking, drugs, and a host of other terrible things.  Don’t buy the bag!

What tips do you have for traveling to NYC?  Leave your must-know-info in the comments! 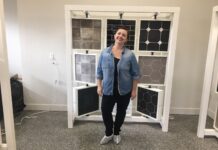 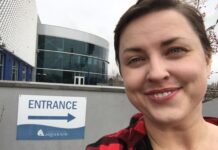 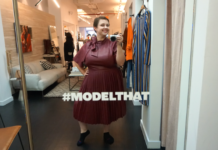 Tour of the Eloquii Store in NYC SoHo | Travel Blogger

How I Feel Confident Wearing Plus Size Lingerie | 4 Tips for You!

Plus Size Bra with No Underwire ! | Interview with Bloom Bras Founder, Lysee...

Plus Size Fashion at The 2019 Oscars

7 Things That Have Brought Me Joy This Week | Self-Quarantine...

How to Become an Instagram Influencer – Guide | Blogging Tips